Behind the Scene with the Internet of Things

It is hard to avoid hearing the term IoT or the tremendous business opportunities created by IoT. But what does IoT really mean to the beneficiary (i.e., the end using customer)? What happens behind the scene?

The Internet of Things (IoT), as defined by Wikipedia, is the network of physical devices, vehicles, buildings and other items—embedded with electronics, software, sensors, actuators, and network connectivity that enable these objects to collect and exchange data.

This definition does not give enough credit to what happens beyond the physical devices.

The Scope of IoT

The IoT opportunity is commonly segmented into unique industries and applications as pictured in the figure below provided by IoT Analytics.

The beneficiaries’ perception of an IoT Solution will most certainly vary across Industry/Application combinations. Behind the scenes, there are four IoT components that make an IoT Solution complete. These components seem to be the same across all industries and applications.

Four Components of an IoT Solution 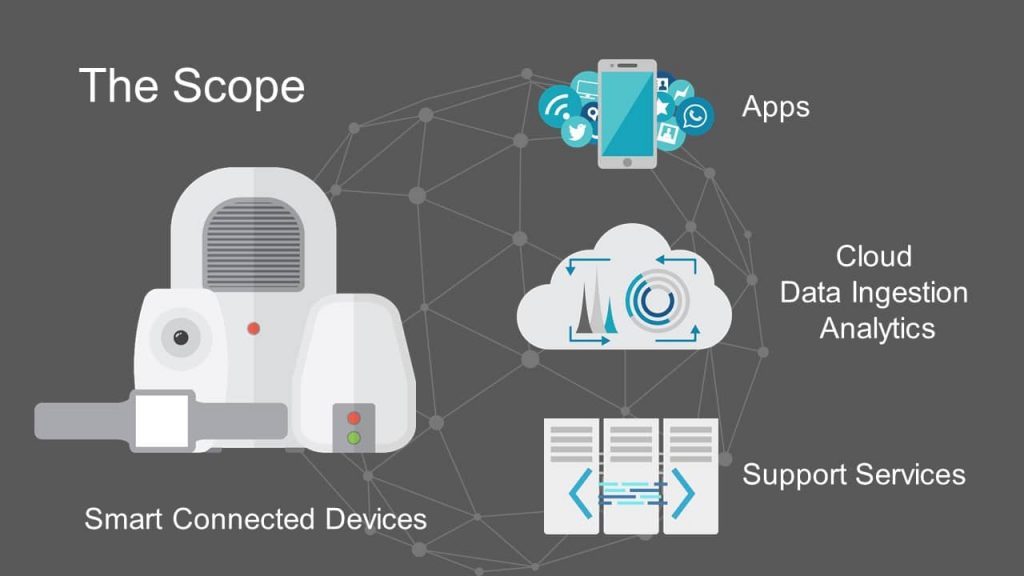 A smart connected device is the “Star of the Show” in the IoT world.  Examples are Fitbits and Nest thermostats in the consumer world. Smart meters, security monitors, and vehicle tracking in the business world. A device, qualifying as “Smart” and “Connected”, will consist of five layers as shown in Figure 3. 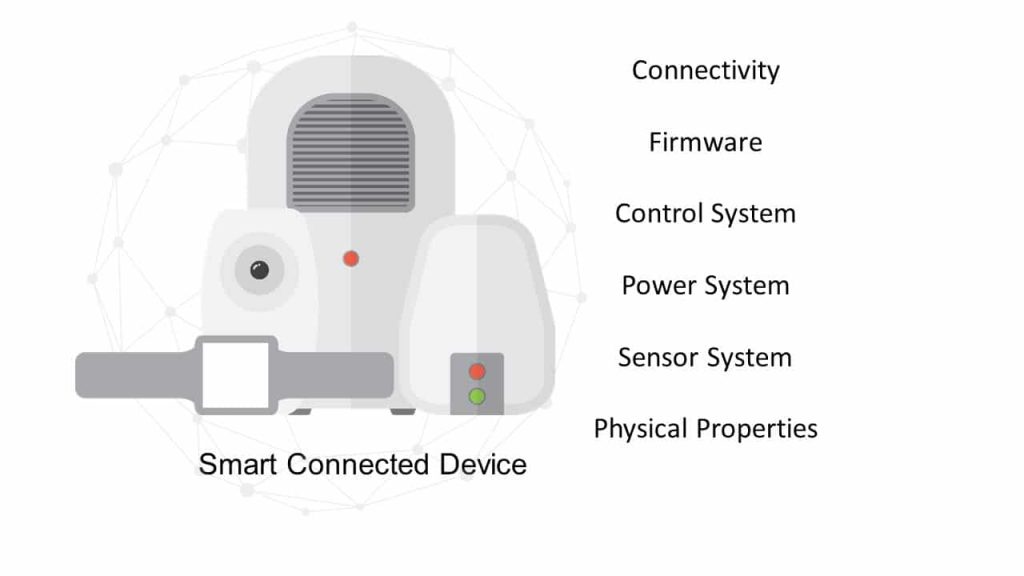 What you see and touch.  The object that can be held, worn, mounted, buried, attached, etc. These physical objects are made smart by an on-board sensor system with Firmware.

A smart connected device will have at least one sensor for collecting data or triggering commands. A sensor system will capture a change in the environment (what it sees or feels), convert it to electrical pulses, amplify the pulses, and deliver the pulse information to firmware.  Accelerometers, Gyrometers, Compasses, GPS Receivers, Microphones, and Cameras are examples of commonly used sensors.

Firmware is software programmed into read-only memory (ROM). In the case of a smart connected device, the firmware is programmed into on-board ROM. This is a minimum requirement for making a physical device “smart”. The firmware receives pulse information from the sensor system and takes action. This action may involve converting the pulse information to usable data (i.e., a temperature reading) and sending the data to the connectivity system. Or, it may trigger a command that would be sent to the control system.  Firmware can also include capabilities to perform analytics or calculations prior to delivering data or sending a command.

The control system enables the device function, how it moves or behaves beyond its static state. This can consist of a series of mechanical components such as actuators, cams, or levers.  Or, it can consist of electronic components such as a display reading. It is not unusual to see the control system built into the firmware, especially in use cases where there is no physical movement of the device but perhaps a change in an on-board display.

Now we have a Smart Device, next we must make it connected.

There are many different methods for a smart connected device to transmit and communicate. Common technologies for transmitting include cellular network, Wifi, Bluetooth, RFID, and near field communication (NFC).  Common communication protocols include REST, SOAP, SMPP, MQTT, XMPP (OK, too technical, ultimately data is transmitted back to a server via an internet connection in a language / protocol that the receiver understands).

Now that we have a better understanding of what makes up a Smart Connected Device, on to the rest of the story.

IoT Beyond the Device 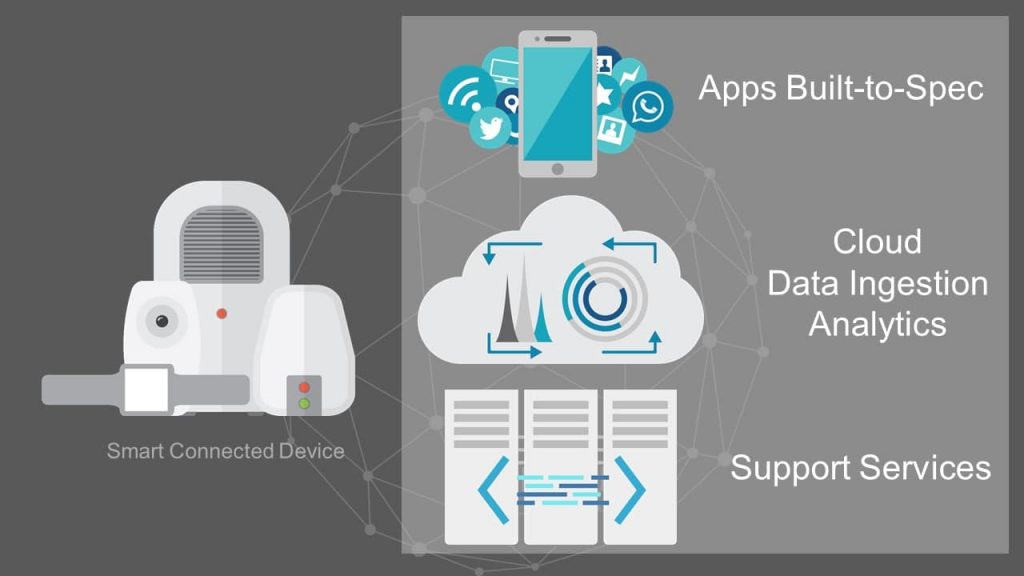 Each of the remaining three components of an IoT Solution are identified by their own layers of capabilities as shown below: 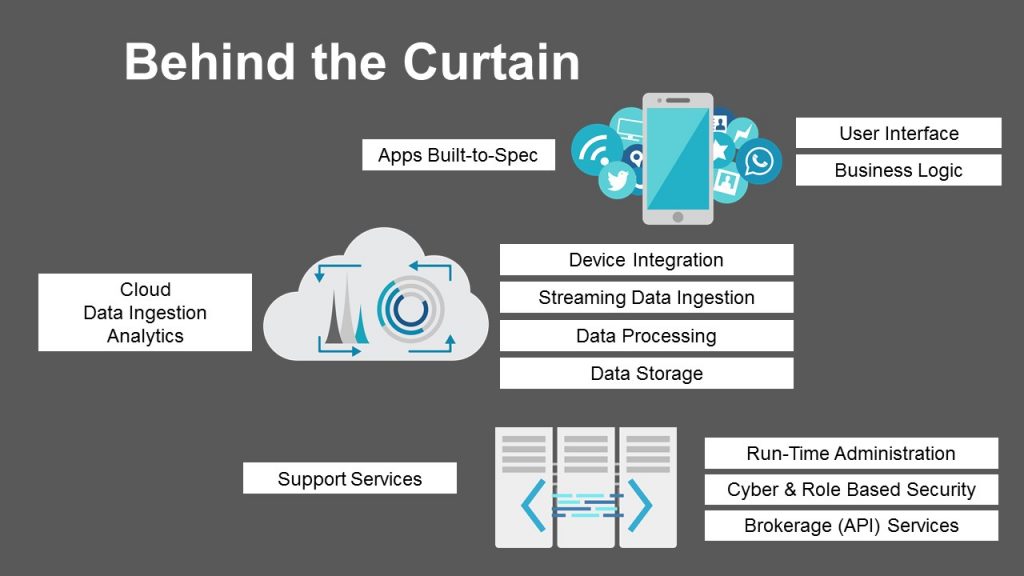 Apps consist of a User Interface (UI) layer and a Service Layer.

The UI of an App is a remote window into a device, viewed with a web browser (or mobile app). It can also be the access portal for data collected from a collection of devices. An IoT application will have at least one UI but often times more. There may be a UI for the end user and another UI for a dealer and perhaps a third for a service provider.

An app won’t do much without a Service Layer. In its simplest form, the service layer applies logic to available data and presents it to the UI.  But it does much more than that.  It provides the capability to communicate with services that are complimentary to the Smart Connected Device (payment services, telecom services, help desk services, command centers).

The device communication layer allows the back end system to communicate with smart connected devices (see Connectivity above).

The data processing layer applies simple or complex logic to the streaming data, invoking a reaction such as sending a command to a device, storing the data, sending an alert to an User Interface.

The data persistence layer (storage) subsequently stores the streaming data as well as the derived insights making all available for further analytics and export into downstream applications.

It is the Data and Analytics component that you will find Big Data technology playing a predominant role given the large volume of data having wide variety of structures potentially streaming from smart connected devices at a high velocity.

If it is not evident, the IoT system is complex. Rarely are the skills needed available in one or even a few individuals.

The IoT technology will be collecting and sending data to and from smart connected devices. When called upon, the entire IoT system must perform in a cloak of security (see CIA triad) to maintain confidentiality (rules that limit access), integrity (assurance that data is trustworthy and accurate), and availability (reliable access to data by authorized people).

Furthermore, security must be routinely considered as all four components of the IoT Solution are being developed to ensure that Admin and Security services accounted for as the IoT Solution is deployed.

A significant benefit of IoT is the use of public and provide data to enhance the data streaming from devices. Data provided by weather.com or Google Maps, for example, is accessible through APIs.

In the world of IoT, the Smart Connected Device is the Star of the Show. The IoT Software behind the scene consists of three critical components to pulling the IoT Solution together.  Apps, Cloud/Data/Analytics, and Support Services. But we failed to mention one critical role. A role without, the main event would never get started. The “Screen Play Writer”.  In the world of IoT, we might call this the IoT Integrator or the guy with the good idea!

Building a complete IoT solution requires a significant amount of creativity and technical expertise. The creativity piece is where the “writer” shines but in many cases, they find it more efficient to partner or acquire the technical expertise. Alternatively, and common in startups, a writer, or IoT Integrator might also take on device development, i.e., the Star of the Show (a la Sly Stallone in his creation “Rocky”) but look to a service provider to bring together the non-customer facing components to avoid direct staffing this skill set, minimize risk and control upfront costs.

What to do next

If you are an IoT Integrator with an idea that fits within a market/industry, you may be looking to capture that market by sourcing the components given the time and expertise required to build from scratch.

If you are a Device Maker, your expertise and competitive differentiation is in a Smart Connected Device. Perhaps you are looking to partner with an IoT Integrator and or a back-end service provider with expertise in App development, Big Data, and DevOps.

If you are the end beneficiary of an IoT Solution, you now know what is behind IoT and are able to ensure that you are leveraging the entire scope with your investment.

Now that you have been behind the curtain, what do you think? Please give us your opinion or let us know how we can help.

Joydeep Misra currently leads the IoT and Big Data initiatives at Bridgera LLC in Raleigh, NC.  He is passionate about new technologies and adding value through innovative use of emerging technologies. He is currently responsible for Bridgera’s IoT platform using open source Big Data technologies.